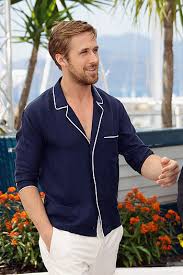 Ryan Gosling’s life is about 89% cooler than mine.

He is rich. He has dated a number of extremely attractive female celebrities. And all of his roles pretty much revolve around being good looking, hooking up with hot chicks or just generally looking like a badass.

Needless to say, I am jealous of him. I can go 4-5 days without shaving and stare smugly into a camera. Why can’t I have his life?

So I did a little research of his Wikipedia page to find out just how jealous of him I should be. And during my perusing I got completely sidetracked. I found out that despite living in NYC, Gosling co-owns an upscale Moroccan restaurant called Tagine in Beverly Hills. Apparently it was an impulse buy that Gosling sunk all of his money into and he now oversees the menu.

I had dinosaur chicken nuggets for dinner last night. Screw you, Gosling.

And sure enough, it’s true. The restaurant really does exist and Gosling really does co-own it. It’s all there in the front page of Tagine’s elegant website:

“Chef Ben’s earliest memories growing up in Morocco, take place in the kitchen. Clinging to his mother’s apron strings, he watched as she lovingly prepared meals from her daily finds at the market.

It was those kitchen-side memories that evoked his passion for cooking and eventually led him to Los Angeles. With his mother’s recipes in tow, Chef Ben set out to bring tradition to the trendy, and perfected his own modern take on the centuries-old cuisine.

A catering opportunity in Hollywood put his dishes in the company of many well-known celebrities, including a then-rising star, Ryan Gosling. A few empty plates later, Ryan inquired about the caterer insisting it was “food he would eat everyday for the rest of his life.” The two became instant friends and after some time talking, they agreed there was something missing in L.A- the kind of place that made you feel warm and satisfied; a place where the food is made with love.

Unable to find it, they created Tagine.”

Truly inspiring. I wish they said which movie Chef Ben and a “a then-rising star, Ryan Gosling” met on the scene of. I bet it was “GooseBumps.”

So anyway, the excitement did not end there. After checking out the menu, I realized that Tagine caters! How great is that? They even have a little box where you can explain your event and any special requests that you might have.

So naturally I requested the services of the restaraunt. Here’s a picture of what the request page looks like:

And here is a full copy of the request that was sent to Tagine:

I cannot express to you how excited I was to find out about your restatuant. I have never had Moroccan food, but I’m sure that I will “Crazy, Stupid, Love” it. That’s a little joke.

But in all seriousness, I have a few requests before I allow Tagine to cater my “Walking Dead” watching party. These are pretty basic requests and I am sure you are quite used to such demands.

First and foremost, I think that it would be fitting that while catering the event you are wearing the jacket from the film “Drive.” The one with the scorpion on the back. However, your character in that film is quite aloof and I would appreciate it if you did not act that way at the event. I think it would be more fitting if you acted like your character, Alan Bosley, from “Remember the Titans.” At first you seemed a little peer pressured to be racist like some of your white teammates, but you came around pretty quickly and soon enough you were dancing with the African-American players in the locker room. That’s kind of the vibe I’m going for at the party.

You are more than welcome to bring Eva Mendez to the party if you two are still an item. In fact, you are welcome to bring any of your ex-girlfriends except for Blake Lively. I owe Ryan Reynolds a considerable amount of money from a failed business venture and I’m trying to lay low until he forgets. I’m sure you understand.

Last but not least, the food. Don’t get me wrong, The Black Tiger Shrimp, Suckling lamb tagine and colonial couscous all sound delicious. But there is an asterisk that says “*menu subject to change.” I was wondering, is there any chance that it is subject to change to pizza? My Walking Dead crew are all big pizza guys. I’m sure Chef Ben has some early memories of his mother whipping up a couple Chicago-style deep dishes.

The event will be at a rented out movie theater in Fort Worth, Texas. I look forward to doing business with you. If things go well I will absolutely consider Tagine when the season premier of Breaking Bad debuts.

For now all I can do is cross my fingers and hope that a prompt and promising reply comes my way. If I get a response I will be sure to provide an update and of course, you’re all invited to the watching party.

2 thoughts on “My Email to Ryan Gosling’s Restaurant”