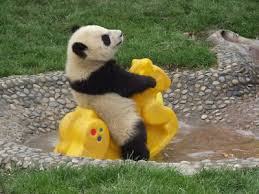 If you’re new to “Yahoo Trending” it’s a recurring feature at Stories For Sunday where I take a look at the top 10 subjects trending on Yahoo.com as a source for something to write about. Yahoo! never fails to provide some interesting topics so I pick one and break it down.

I decided it was time for another installation of “Yahoo! Trending.” I wanted to find some news stories that would be a lot more entertaining to write about than fiscal cliffs and gun control (you know, important stuff). So I turned to the site that never fails to let me know the top ten things that our country is really interested in.

And it did not disappoint. I had some great options to choose from. There was “Bieber wants new laws,” “UFO-shaped gas station” and “Latrell Sprewell arrest.” All of them were viable candidates.

But at the end of the day nothing really compared to “PANDA BLOOD”!!!!!!

So obviously I clicked on “Panda Blood” to see why it could possibly be trending. As usual, I was provided with a prolific amount of articles to choose from and as usual I randomly clicked on one.

This is the link to that article.

So here’s the breakdown for you: Some scientists over in China believe that there is a substance in Panda blood that “kills bacteria and fungi.” The substance, called cathelicidin-AM, could be used to fight certain ailments that are resistant to current Anti-Biotics. The scientists hope that they can artificially reproduce the substance from the animals to avoid what I would imagine involves stabbing a lot of pandas.

Here are my quick reactions to this story:

I’m only going to say this once. If extracting blood from pandas somehow leads to a scenario even remotely similar to the things going on that commercial then I’m completely against it.

If panda blood is so great at protecting the immune system then explain to me why that little baby panda is sneezing. On the other hand, the mother or father panda does get pretty scared when the baby panda sneezes as if he/she has never heard a sneeze before. Perhaps the baby has defective blood. Now I’m as conflicted as ever on this whole issue. Not to mention pretty worried about that little guy. Does anyone know if he’s still alive?

Overall, I think panda blood will be a pretty hot-button issue going forward. We can only hope that scientists truly are able to create the blood artificially because I really don’t like the idea of pandas bleeding panda blood just so that I can get rid of the flu.

Then again, I have the flu right now as I’m writing this. I’m pretty miserable. I wonder how much panda blood would cure me. I mean if it’s just a drop…