Our parents could only take so much of us…

That’s why they let the other 30% of parenting and nurturing come from cartoons. We all watched our fair share of cartoons, but I recently realized that our parents definitely didn’t watch most of those cartoons with us, because if they did, they would have been horrified.

Obviously, cartoons have always been kind of out there and crazy. Loony Tunes and Tom and Jerry were both pretty violent when you think about it. But that’s all in good fun. Seeing a mouse hit a cat in the head with a hammer does little psychological damage to small child (I assume).

But there were some cartoons that were just really, really weird. Going back and watching them now, would actually be quite frightening. And I think they probably did unidentifiable and irreversible damage to our future personalities.

Here are a few examples: 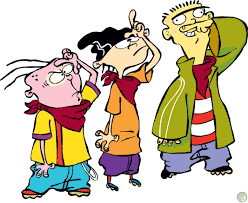 Best case scenario this show was about a mentally retarded boy, a smart kid with some sort of chicken leg disorder and a total asshole friend that looks like he’s 40 years old. Oh, and they are all dangerously addicted to Jawbreakers.

Here’s a video of the first episode:

*Normally I worry about posting long videos because I assume people won’t watch the whole thing, but I couldn’t care less how much of this clip you watch. There’s not a twist at the end, trust me.

I’m not fully convinced that Eddy is not a grown man that just hangs around with two adolescent boys. He looks 40 years old and sounds 40 years old.

Also, if you pretend they are all grown ups and replace the Jawbreakers with crack rocks then the show still holds up. They spend just about every episode scheming to con the other kids in the neighborhood out of their “Jawbreakers.”

Apparently there’s also a conspiracy theory about Ed, Edd N Eddy (seriously, google it). The theory is that all the children are dead and the neighborhood is some kind of adolescent purgatory. That would explain why all the characters are unnatural colors and look like zombies. It would also explain why you never see an adult the entire series. The theory also points out that most of the children dress or behave like they are from different time periods (some use typewriters, some use computers) and that means that they are all children that have died at various points in time throughout the 20th century.

Ren and Stimpy was a show about a sociopath Chihuahua and a fat cat that looks nothing like a cat. As with Ed, Edd N Eddy, Ren is the leader of the group and sounds like a 40-year old man. This show was full of violence and creepiness. Both characters seemed to be on an insane amount of drugs at any given time.

Here is one episode called “The Baby Scam”:

Let me explain to you the premise of this episode:

Somehow, the parents of said babies can’t tell the difference between their children and two animals. Also, the mother keeps a disgusting shrine full of dirty diapers. At one point, Ren rips off a Teddy Bear’s nose and then spits inside of the hole he created. This is not explained or addressed at any point later.

Then in a HORRIFYING scene, the father rubs Ren’s face against his own. The man’s stubble from his beard literally grates off the skin of Ren’s own face.

The police find the actual babies and show up to the house. The father addresses the police officer while completely naked except for shoes. The show ends with the babies literally beating the shit out of Ren.

So yeah, it’s a weird show. 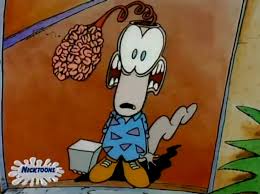 I always sympathized with Rocko. He was just a wallaby living in a really screwed up world.

This is a cartoon that Rocko and his friends watched. You’ll notice at the end that Rocko was the only one that didn’t enjoy it.

Does somebody want to tell me what the fuck that was about?

So if you wonder why you have extreme anxiety and strange phobias, it’s proabably just because you were exposed to large doses of these cartoons.

One thought on “Cartoons that Made Us Weird”