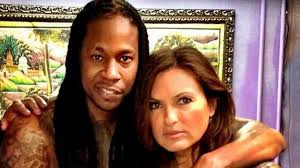 “Tuesdays With 2 Chainz” is a recuring feature in which the author takes a moment to discuss what is new in the life of rapper 2 Chainz or bless the public with assorted bits of 2 Chainz trivia.

A lot of you might think that 2 Chainz is just a rapper. That, my friends, is incorrect. He’s also an actor in shows that make very little sense for him to be in. Last week we discussed his role in the CBS sitcom “2 Broke Girls.”

Enter 2 Chainz. Season 15, episode 22, titled “Poison Method.” I didn’t see this episode of Law and Order: SVU and 2 Chainz’ almost 65 combined words of dialogue are nowhere on Youtube to be found. But luckily for you, I spent about 10 minutes fast forwarding through the online episode until I saw 2 Chainz.

This is what I now know about this episode:

Have you ever wondered what 2 Chainz would look like if he were knocked over a massage table and was slightly scared for his life, but decided to stick to his guns and refrain from giving information to the police? I bet you have. He would like like this:

This episode is just another example of 2 Chainz’ vast range as an entertainer.

My one complaint about it is that the show didn’t make notice to the fact that they had such a huge star on their program. For example, I think we all know the Law and Order sound that plays when they transition from one scene to another in a dramatic moment. It sounds like this. I thought it would have been fitting if the show temporarily replaced that sound with 2 Chainz yelling his name into the microphone as he does in all his songs. Imagine a dramatic moment followed up with any of these.

This is the type of mistakes that Law and Order:SVU can learn from. Hopefully when 2 Chainz eventually returns to the show, probably to play a full time detective, they will implement these sound changes.

Join us next week when we discuss 2 Chainz inexplicable appearance in a Fall Out Boy video.