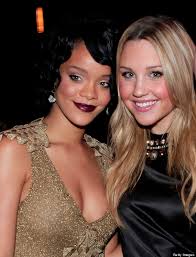 I feel pretty strongly that Twitter’s most useful function is to allow us to gauge just how insane some celebrities have become. When people tell me that Amanda Bynes has gone crazy I tend to ignore them because I generally don’t care about Amanda Bynes.

But when people tell me that Amanda Bynes has started a Twitter Beef with Rihanna then I’m listening.

I love celebrity Twitter beefs for a couple reasons. Starting a Twitter Beef with someone is the equivalent of having something terrible written about someone on a billboard over a freeway with a lot of traffic, except this freeway has about a bajillion drivers and each one can copy the billboard and post it over a new freeway. Also, you can only write 140 characters in a tweet. So whatever they say is usually really direct and to the point.

Well, Amanda Bynes was really direct and to the point with Rihanna. Bynes tweeted some mean stuff about the pop star and quickly deleted the tweets, but TMZ took a screen shot of them beforehand. Here is a picture of the tweets:

Here are my top three initial thoughts upon seeing this picture:

I seriously doubt that Chris Brown beat Rihanna because she wasn’t pretty enough. I don’t know why anyone would hit their significant other, but I’m guessing Chris Brown did it because he is an insane person who wanted to cause harm to Rihanna. That kind of sounds like someone else who just so happens to follow seven people on Twitter and seriously needs to be verified.

That’s not the only thing that Chris Breezy and A-Beezy have in common. Brown also tweeted something noteworthy this month and also immediately deleted it.

This is what Brown tweeted on his birthday:

” I’m personally so fucking tired of people it’s sick! Who made y’all god!!!! Society is fucking overrated and a bunch of followers.”

Yep, Brown tweeted to his millions of Twitter followers that society is just a “bunch of followers.” Too bad he deleted it, if enough people had retweeted it maybe society would have turned into a bunch of individuals who beat to their own drum and not just followers of stupid trends like buying the latest fashion, watching the popular TV shows or following crazy ass celebrities on twitter.

Back to the beef.

Ya see what happens when they cancel Intervention?

Accusing her of doing drugs. Shots Fired. Bynes responded again (and again deleted it) saying this:

“@rihanna unlike ur fugly faced self I don’t do drugs! U need the intervention dog! I met ur ugly face in person! U aren’t pretty u know it!”

I know what you’re thinking in this situation: “Rihanna is clearly the victim here. Who would be crazy enough to defend Amanda Bynes?”

Well, it turns out one of the seven people she is following has her back. No, not Barack Obama. I’m talking about Waka Flocka Flame.

Waka Flocka reached out to AB and tweeted this to her:

@AmandaBynes when people hate and the media lies……. That means you popping #FlockaFacts

If you don’t know much about Waka Flocka Flame then this video should say all there needs to be said:

So I’ve done a whole lot of talking about ugly Twitter Beef between two celebrity females, but I haven’t discussed how to fix it. So here we go…

Bynes is a once successful actress who is going through some issues finding work. It happens. Her confidence is probably pretty low. So how do you think it makes her feel that Twitter doesn’t show her account as verified? Perhaps that little check could have prevented this entire meltdown.