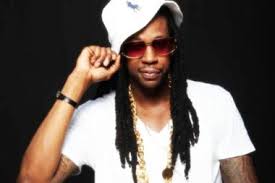 “Tuesdays With 2 Chainz” is a recuring feature in which the author takes a moment to discuss what is new in the life of rapper 2 Chainz or bless the public with assorted bits of 2 Chainz trivia.

Look, I’ll be honest, the past few “Tuesdays with 2 Chainz” haven’t been all that time relavant. They have more been random discussions on things that 2 Chainz has been apart of in the past. The segment is only a couple weeks old, but 2 Chainz has been doing things for quite some time. There are a lot of things to catch up on.

But this week there was legitimately breaking 2 Chainz news. The man was robbed at gunpoint in San Francisco last Sunday. His cell phone and wallet full of cash and credit cards were reportedly stolen.

The details about the robbery are vague, but Rolling Stone reported the information that the police reported.

If you were to be walking around downtown San Francisco (or any major US city) when do you think would be the most likely time to be robbed? My first guess would be the middle of the night. Well, that’s not when 2 Chainz was robbed. He was robbed at approximately 4:30 PM, which is not the best endorsement for the safety of the city of San Fran.

That’s one odd thing about the robbery. Another odd thing is that 2 Chainz was with six members of his entourage. If you are walking around with a six-member entourage at least one member should be the “make sure we don’t get robbed” member. Even if your members include brother, cousin, weed guy, Turtle and “guy who remembers what time you’re supposed to be places,” that would still leave you with one spot for “make sure we don’t get robbed guy.”

That being said, one of the two robbers did have a gun and even fired a shot in the air so maybe it was smart for 2 Chainz and company to just surrender their goods.

But the strangest thing about this whole story is the fact that despite there being a police report in which 2 Chainz or one of the entourage obviously would have had to provide the information of the incident (where else would this info come from?), 2 Chainz later denied it on Twitter.

Ok, 2 Chainz is a rapper whose lyrics imply that he is a pretty tough guy and maybe it’s pretty embarrassing for it to come out that he was held up. I get that. But his actual denial of the incident is quite interesting itself.

Here is the first tweet that he tweeted providing logic that would supposedly debunk the (factually based) rumors that he was based:

Rule #1 if a rapper gets robbed people usually post items that has been taken. Rings, chains, watch , money etc. 2 answer that question

I honestly don’t know what this means. Is he claiming that because no one has posted photos of the items that they robbed from 2 Chainz to brag about it that proves the robbert did not happen? Perhaps, no one is posting photos of the stolen goods because they don’t want to get arrested.

He also ends the tweet with “answer that,” despite not asking a question in the tweet. That doesn’t even make sense. Answer me that.

He then followed that tweet up with this one:

Rule#2 if a rapper gets shot he usually go to hospital or dies .

Well, one thing that we should establish, just in case someone is feeling like doing something dangerous, is that normal people face the exact same threat of going to the hospital or dying if they get shot as rappers do.

2 Chainz then randomly added this rule to the mix:

Rule# 3 we definitely got geeked up in San Fran , best smoke in the world. 2 blessed 2 stress

One obvious question to ask is how are any of these things rules?

Here are my own rules:

Rule #1: If a writer gets robbed then the robber probably made out with less than $20, a debit card and a Chipotle gift card without enough credit left on it to pay for chips and guac. Answer me that.

Rule #2: If a writer gets shot, he usually bleeds. Like, 88 percent of the time there’s at least a little blood.

Rule #3: Definitely getting geeked up in my living room. Got a TBS movie from the nineties on and BOTH Blueberry and Banana Nut Mini Muffins. 2 Blessed 2 Stress.

In conclusion, I think that we should all refrain from reaching out to 2 Chainz and expressing our sympathies about the fact that he was robbed. He’s a prideful man. He wants no part of such sympathies.