The NBA season will will wrap up on Thursday night. Either the Miami Heat or the San Antonio Spurs will be crowned as NBA Champions. A lot has happened this season: Rajon Rondo, Kobe Bryant, Russell Westbrook and Derrick Rose all missed (or continued to miss) significant playing time due to devastating injuries. The Miami Heat won 27 straight games, the second-longest winning streak in NBA history. Carmelo Anthony won his first scoring title. And we were asked to believe that Chris Paul has an identical twin, a story that is chalk full of holes and inconsistencies.

Besides all that, this was my first season covering the NBA while being credentialed with a press pass. In other words, this was my first season going to press conferences and hanging out in the locker room with NBA players who were totally uninterested in my existence. If you know me at all, you can probably assume there were some awkward moments.

I’ve found that people are much more interested in the stories that make me sound awkward and/or pathetic than they are in stories about how I had the chance to interview athletes that I grew up nearly idolizing.

So I may have a personal list of the top 10 athletes that I had the chance to speak to this season. And I may or may not be a little proud of that list. BUT you may or may not give a shit about that list. And you would probably rather hear stupid stories that involve me embarrassing myself. So that’s what I’ll provide you with.

*Understand that the full awkwardness of these situations might not be realized in their retelling. That’s because I’m at least halfway decent at writing, so the things that I write usually come across as understandable and hopefully have a nice flow to them. What I’m not good at is socially interacting with other people in crowded, rushed situations and just generally not being awkward so the true uncomfortableness of the moment might have a little bit of a “had to be there” sort of feeling to it (judging by that last sentence, I might not actually be that good at writing either). But nonetheless, I’ll do my best to help you understand what made these moments that I still cringe when I think about.

The Dallas Mavericks signed 37-year old Mike James midway through the season. James, who has played for 11 different NBA teams in his career, a few minor league teams and teams in foreign countries as well, had announced that he wanted to come out of retirement and contribute to an NBA team. He eventually became Dallas’ starting point guard.

I did a one-on-one interview with James hoping to get some interesting tidbits for a feature I was going to write about him. I had a number of questions planned that centered around all the time he had spent in the league, comparing different teammates he’d played with, etc. The wording of my questioning was not ideal.

I basically started each question off by reminding him how old he is. I actually wasn’t sure if this moment was actually awkward enough to make the cut, then I found the interview in my phone and listened to it again. Yikes.

At one point he sarcastically told me, “I’m actually a pretty good basketball player.”

When I asked him about retirement he just asked me, “Do I look like I’m ready to give up.”

He finished one answer by saying, “It’s unfortunate that everyone focuses on my age.” I then provided the following transition: “So…yeah…going off that point…You’ve been around the league a LONG TIME. How would you compare the Mavericks’ organization to others you’ve played with?” 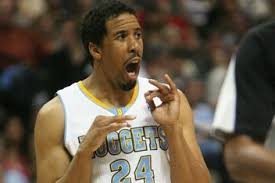 Andre Miller was watching game film on a projector. He was sitting on the ground with headphones on. I was standing between him and the projector listening to his teammate, Corey Brewer, talk to some media members. Miller said something to me. Because he had headphones on he did not realize how softly he was speaking so I couldn’t understand him. Then this happened:

I do that thing where I look over my shoulder and see if he is talking to someone else. I then get a little closer.

I get even closer and at this point, I’m bent over and my face is about an inch away from his face. I whisper as quietly as he is speaking.

8.) James Jones Throws His Shirt on Me:

I was momentarily sitting in a court-side seat as the LA Clippers warmed up. Blake Griffin began to stretch inches away from me. The bottom button of his warmup pants was unbuttoned. For whatever reason, I decided to inform him.

He gave me pretty much the exact stare that he gives in this commercial:

After holding the stare for just under two seconds, he very calmly said “Thanks.” He then buttoned it and never spoke to me again. To solidify the awkwardness forever I took this picture with my phone:

These two encounters, as well as the James Jones moment, are elaborated on in this piece that I wrote back in December.

I was trying to get to Lebron James. I was one of about 30 people trying to do so. Wade was icing his knees in a large bucket. The bucket was between me and James. I made the leap. I cleared it by about a centimeter.

I then aggressively told a another reporter to move so that I could get closer to James. Except it wasn’t another reporter. It was Norris Cole who is relatively short for an NBA player. He told me to hold on. 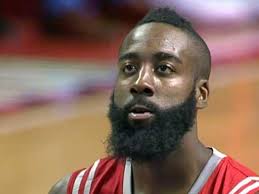 I was the last media member to ask Harden a question before he went to shoot some baskets before his game against the Mavericks. He was very friendly. As we were both heading towards the court I mentioned to him that I had been growing my beard for a few weeks.

He responded with, “Don’t worry man, mine looked like that after the first couple weeks too.”

So yeah, the man with the most famous beard in the NBA dissed my facial har.

James, if you’re reading, my beard looks pretty decent now. I’ll have you know that the mustache part actually connects to the beard part.

3.) JaVale McGee and I Disagree Over Spelling: 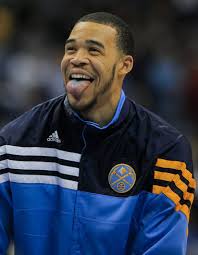 McGee was on his stomach in the middle of the locker room being stretched by a trainer. He was on his phone, probably either texting or tweeting.

None of his teammates seemed all that interested in helping him out but he kept inquiring. I just so happened to be leaving the locker room and had to walk by him anyway so, as I passed him, I held two fingers in his face and said “Two E’s.” I had to say it twice.

He looked at me and started laughing and said (as if we were buddies) “Man, that’s stupid.”

Then he kept laughing and turned to some teammates and said “This dude say it’s got two E’s.”

Ty Lawson then informed him that I was correct. 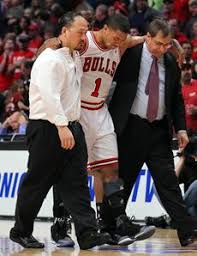 Derrick Rose missed the entire season with a leg injury. The entire Chicago Bulls franchise depends on his health.

He was working out on the court before the Bulls played the Mavericks. He was walking off the court at the same time as me into the tunnel. We both stopped. He said, “Go ahead,” then walked forward anyway. For this reason I stepped on his foot.

Three grown men who I presumed to be athletic trainers or possibly assistant coaches gasped and jolted towards me. Rose laughed and said “My bad.”

At least once in my life I want people to react with such fear and concern when my foot is stepped on.

1.) Looking Down on a Pants-less Steve Nash: 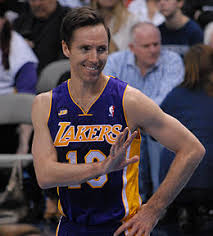 Steve Nash did his post game interview while sitting down in a chair. He was wearing a button-down shirt and a tie. He was not wearing pants.

Nash is an savvy veteran, he knew that the camera men would keep the shot head level. If he wanted to get interviewed by the media without pants on then he would do just that.

So I was on Nash’s left side holding my phone in his face, trying to record all of his answers. It was a pretty cramped situation and standing next to me was a heavy set man with a recorder of his own. I don’t know what was wrong with the equilibrium of this heavy set man, but he just could not seem to manage to stand in one place.

And when a man who weighs over 300 pounds steps on your foot…it hurts. So after the first time this happened I wanted to avoid it happening again. So I kept tabs on his little side steps by looking down every few seconds to monitor his movement. It took me a little while to realize that if you are standing over someone who is not wearing pants and you are constantly looking down, you might be putting some unintentional signals out there.

Nash was frowning when he answered my question. I’ll never know if that was a natural frown from a tired man who just played a game of basketball or a “who the hell let this guy in here?” frown.

So the point is that I’m an extremely professional journalist who can handle adversity and gets the job done at all costs.

And sure, there’s a chance that these aren’t actually the most awkward moments that I was involved in during NBA games and I’m just too embarrassed to tell you more, but, hey, you’ll never know. I mean if I thought that a female Memphis sports anchor had flirted with me earlier and tried to return the favor without realizing that she was on the air at the time, why would I tell you? That would be crazy. Same goes for if I walked up to a player on the Orlando Magic and said his first name and completely blanked on any potential questions to ask him and just turned around and walked away.

I guess these are all just lessons that we learn in life. Pointless, unnecessary lessons.