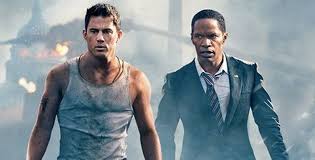 Lonely Movie Reviews is a recurring summer feature in which Jonny simultaneously solves the two problems of having to find people to go with him to see as many summer movies as possible and creating some sort of gimmick to make people read his movie reviews by going to movies by himself and reviewing the films while also sharing the experience of seeing the movie alone.

For the Lonely Movie Review of “Man of Steel” click here.

In May of 1998 Morgan Freeman was in a movie called Deep Impact about a comet heading towards Earth with the potential of ending human life forever. Freeman played the president of the United States.

I saw this movie and was somewhat entertained. However, a few months later, in July, another movie came out called Armageddon, with almost the exact same plot. It was considerably better.

Fifteen years later I still remember the lesson I learned back in 1998.

So when I learned that Morgan Freeman was in a movie coming out last March called Olympus Has Fallen, about the White House being taken over by violent terrorists I was intrigued. But then I realized that there was another movie coming out in July called White House Down with almost exactly the same plot.

Refusing to make the same mistake twice, I avoided Olympus Has Fallen and instead opted to see White House Down. Alone.

This is my second installment of “Lonely Movie Reviews” and therefore, my second time to ever see a movie by myself. I have learned that the vibe that Don Draper from Mad Men puts off when he goes to see a movie by himself is totally different than the vibe that I feel I put off when I see a movie by myself. When Draper does it, it’s somehow obvious that he is searching for creativity while also clearing his mind from a stressful job. Not to mention, he almost always finishes the night by having sex with a beautiful woman. When I get to the theater I immediately feel like everyone in the building is judging me and I sink super low in my seat. And the only thing exciting that happens to me later that night is finishing a half-eaten bag of Sour Patch Kids. (Actually, that’s not true, I pretty much always finish the bag of Sour Patch Kids in the theater.)

Once again, I went to a theater where you have to choose your seats on a little computer screen before you enter your theater. Once again, I chose a spot in the back.

The next five minutes before the previews started were some of the longest minutes of my life. I was trying to avoid eye contact with all the happy couples and groups of friends that were in the theater and hoping that no one would sit near me. I felt extremely uncool.

Then I could see someone walking towards me. He was a man, probably around 35, perhaps a little overweight, and most importantly, he seemed to be by himself. He sat down near me and pulled out his phone to text. “Surely, he’s just waiting for the person he came with who went to the bathroom,” I thought while pretending to text someone.

But after a minute or so I realized that he was another solo movie-goer. I had an overwhelming sense of relief. If I were trapped alone on Mt. Everest and came across the first human I’d seen in days, I probably would have been equally as happy to see them as I was to see this guy. I was immediately at ease. We never said a word to each other, but there was an understood bond between us. Not only that, but the guy sat two seats away from me, the perfect distance, close enough to feel less lonely, but far enough away for me to avoid starting to wonder if he was some type of serial killer who went to movie theaters to scout out his next victim.

In the first 10 minutes of the film you will hear President Jamie Foxx say the words, “The leader of the Free World is saying ‘pretty please.’ That’s got to count for something.”

And it did count for something. It set the stage for a movie that caused its audience to suspend all disbelief for two full hours. The entire movie is just one thing after another that makes you say “That would literally never happen.”

But that doesn’t mean it wasn’t entertaining. It was a throwback to cool action movies from the eighties where someone goes rogue to save someone else and all the bad guys seem like they’re really racist and wouldn’t be cool to hang out with.

A huge premise of the film is that an 11-year old girl is completely obsessed and fascinated by politics. The chances of this are pretty slim. Have you seen how cool the newest Fruit Ninja app is? I don’t think a lot of little kids are on the CNN app.

To be honest, there is very little difference between this movie and the Fast & the Furious movies, except this one tries to seem more worldly by including extremely vague political references. However, I happen to like the Fast & the Furious movies because of the amount of cheesy lines and cool special effects that make you want to high five whoever you came with, which for me was no one.

Sorry Morgan Freeman, you never stood a chance. You just have to stop being in movies that are quickly followed by movies with identical plots.