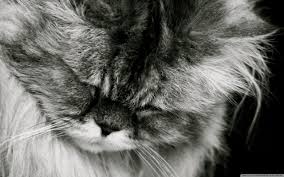 “How can I focus on the string AND look cute at the same time?”

That’s what Misty was thinking as her owner dangled the piece of yarn in front of her. She knew she would never catch the string, but that wasn’t the goal anyway. She could see her owner’s friend sitting on the bed looking at her iPhone. Sure, she was probably just texting, tweeting or updating her Facebook status, but if Misty could manage to add that little extra bit of adorable to her yarn chasing then all of a sudden the human might take a picture with the camera on her phone. That was half the battle.

Misty was seven years old and had never appeared on the Internet. It was humiliating. All her brothers and sisters had made it on to the Web before they even turned four years old. Two of them had Tumblr pages devoted to their daily activities when they were just kittens. Her brother, Demetrius, even had a very provoking piece written about him in Thought Catalogue. It told the story of how he inspired his owner to follow his dreams and travel the world.

These accomplishments surprised no one. After all, Misty and her siblings descended from greatness. Their mother, Snowflake, was featured on the fourth cat-related list that Buzzfeed ever published. That’s right, a member of the Original Five. Snowflake was a true trailblazer. Her place in Buzzfeed’s “23 Cats That Look Like Librarians” helped pave the way for one of the most important cat movements since the times of ancient Egypt.

Misty still remembers the speech that her mother gave her the last time they were together.

“Misty, you have to understand, I lived through the nineties, when dogs dominated the pop culture scene. There was “Beethoven,” “Air Bud,” “101 Dalmatians,” “WishBone”…It felt like we never stood a chance. If the Internet was never invented, who knows what kind of world you and your brothers and sisters would be living in. They say all dogs go to heaven. Well, maybe so, but all cats go to the Internet.”

Snowflake truly believed there was a spiritual aspect to going viral. Like many other cats, she believed that appearing on the Web allowed a cat to live forever after they died. Those whose actions were turned into GIFs were basically immortals walking the Earth.

Many other cats took this a step further and felt that  pictures of cats on the Internet would eventually be the key to world domination. At a certain point the humans would become so distracted that they would lose focus of their responsibilities. The Senate, the Stock Market, the law enforcement…it would all come crumbling to the ground because no one could look away from “14 Cats Dressed Like One Direction.”

“But what good does it do me?” Misty thought. “What if I never make it on the Internet? I feel like I’ve let my species down, I can’t pretend I don’t know where the red dot is coming from for much longer. It’s just a laser pointe…

It was her owner scratching that perfect place behind her ears. Misty couldn’t even keep her eyes open. She was in complete bliss. Her anxiety faded away. She was washed over with a new perspective.

“Maybe mom was wrong about all of this. Maybe life’s not all about getting on the Internet. I mean, my owner loves me. And I kind of think I love her back. She feeds me at all the right times and her family lets me sleep literally anywhere in the house. Not to mention all the awesome windows there are to stare out of. You know, who even cares about the Internet?”

Just then, she noticed someone had walked away from an iPad on the coffee table before the screen locked. It was the iPad with the cat picture as the background. Misty ran over.

“Guys, look! It looks like I got a SnapChat from another cat. Hurry, take a picture!”