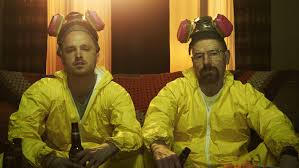 Apparently, everyone all over the country is totally stumped over what will happen in tonight’s Breaking Bad series finale. The internet is blowing up with theories about who will die, who will do the killing and whether or not any character will have a happy ending.

To be honest, I’m surprised the general public is so clueless. I mean, it seems fairly obvious what they are setting us up for: Todd and the Neo-Nazis think they have everything totally under control. They’re about to kill Jesse…when all of a sudden….BAM…Badger and Skinny Pete to the rescue. Those Neo-Nazi assholes never saw it coming.

Regardless of whether or not the show ends with B and SP making a heroic rescue, the fact of the matter is that the episode will likely be very stressful to watch. It will also be the end of a five-year relationship that has meant so much to us.

What do so many of us do to cope with stressful situations? We drink.

And what do we often do when we involuntarily end a long-term relationship? We drink away the sorrow.

So it would probably be in our best interest that by the time tonight’s episode is over we are relatively intoxicated. That’s why I invented the “Breaking Bad Finale Drinking Game.”

*Please be responsible when participating in this game. Participants should be 21 or over. I mean, if you’re like 19 or 20 and in college, I guess it’s cool, just have someone watch out for the RA…And if you’re in high school and you still have some of the alcohol that your brother’s friend bought you leftover from the weekend then who am I to judge?…But NOBODY drive!…Seriously.

Drink After the Following Things Occur:

I don’t think there’s been a scene in this entire series where one of his parents said anything to him and he just took it at face value. He pretty much always responds with…”W-W-Whaat?…..” then completely questions whatever they just said. To be fair, his cynicism was totally warranted, his dad was a sociopath, drugdealer and his mom was a money launderer and cheating on his dad….But still, the other day my mom told me my car was due for an inspection. I just said “OK” and got it inspected. I didn’t act like I just saw the end of Inception.

But with his life in complete shambles you can guarantee we’ll see a lot of ‘confused face’ by Flynn tomorrow. Every new expression is one drink.

That being said, we can’t lose perspective. Jesse has said “bitch” so many times over the past five seasons. He’s made it his own. He wouldn’t leave us without saying it at least one more time. We must honor him by drinking.

We’ve seen Holly cry a few times…and each time it has haunted my dreams.  Every time that baby cries the show feels WAY too real. The scene where Marie tried to steal her couldn’t end fast enough:

Then another episode later we witnessed this and our collective hearts shattered into billions of pieces:

If she cries tonight, just drink.

Whoever you’re watching it with predicts what’s going to happen next: 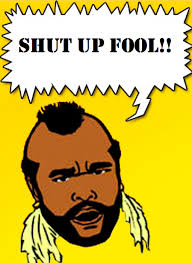 If this annoys you (and it annoys everyone) then you might want to watch the show alone because it’s in our nature to predict what’s going to happen next on Breaking Bad. We just want to seem smart.

So if your buddy, significant other, or family member says “I bet blah blah is about to happen,” just take a drink of beer and calmly remind yourself that the only possible ending is Badger and Skinny Pete serving justice.

If Walt is still alive at the end of the episode (drink a ton): 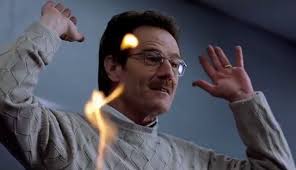 How could they possibly let Walter White survive? He’s a terrible person. He has ruined so many lives. If he’s still alive when the credits hit, then you should drink until Low Winter Sun actually starts seeming like a good show.

If Walt dies in the episode (drink a ton): 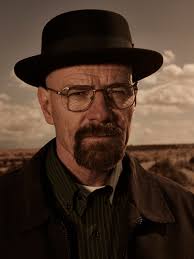 How could they possibly kill the main character? We’ve stuck it out with him for so long. He can’t just die. If he dies this was all for nothing. If he dies you should drink until Talking Bad actually seems like a show worth watching.

That’s the game. I think it will numb the pain of losing one of the greatest shows in television history. Unlike meth, beer solves most of life’s problems. Don’t do meth, kids. Drink beer. But don’t drive.

Also, don’t fret, we always have “Better Call Huell” to fall back on.

One thought on “The “Breaking Bad” Series Finale Drinking Game”