When I was 12 I had a Nintendo 64. When it wasn’t working properly or was behaving in a way that I did not appreciate or if I kept losing at Mario Kart then I would just shut the console down and do something else.

That”s what our government is currently doing. A bunch of people in Washington are arguing and as a result, we currently have no government.

Imagine if someone were pitching you a script for a movie. The premise of the movie starts with the fact that the government is shut down. What do you think would happen next? Probably complete anarchy. Looting, riots, political fist fights, school systems shutting down, the whole nine yards.

But that is not what’s happening.

And that’s probably because our lives are not actually run by the government. I’d like to say that it’s really pathetic that Democrats and Republicans can’t work together just enough to keep the government running and help the American people keep their lives from falling apart. But the reality of the situation is actually much more pathetic than that.

The reality is that if most of the country were being honest, they would admit that  if the following things were shut down it would affect them much, much more.

I'm sorry for staring, but with the national parks closed I had to find something beautiful to look at #governmentshutdownpickuplines

Be honest, if Twitter didn’t exist would you know the government was shutdown? Really? Are you sure? Did you actually click on the link to the article about the government being shut down or did you just read the tweet and complain about it?

And let’s be real, was your first thought “I gotta think of a really clever joke about the republicans/democrats to tweet about this”?

The hashtag #GovernmentShutdownPickupLines exists. And it was trending.

The National Library is closed, but our country does 99% of its reading 140 characters at a time anyway.

If you had two more episodes of Orange is the New Black left to watch and congress announced that the government shutdown would end immediately under the condition that Netflix would be deactivated for three weeks, would you be okay with that?

Think long and hard. New episodes of Louie, Parenthood, 30 Rock, The Office, New Girl, How I Met Your Mother, The Walking Dead and Family Guy just came out.

The cats distract us from everything going on in Washington. They prevent us from using the amazing access of information that is the Internet to read up on the facts and make rationale political assessments. But they’re so goddamn adorable. 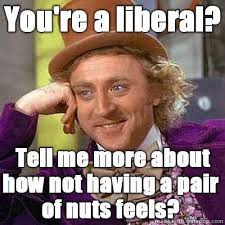 Not having a government? Oh, we can survive that easily.

Not having a way to antagonize members of different political parities? We wouldn’t last two weeks.

I’m guilty of being dependent of all the things I listed above (I have no shame about the cat pictures). I don’t want to suggest otherwise or imply that I could do a better job of running this country than any of the republicans or democrats in Washington. But it seems pretty clear that we are in the situation we are because two political parties hate each other so much that they can’t even come close to anything that resembles a compromise.

It probably doesn’t help that we bad mouth each other’s political beliefs through pictures of Willy Wonka and Facebook pages that are aimed towards making fun of the other half of the country. Liking “Being Liberal” or “Being Conservative” on Facebook isn’t going to give you the slightest bit of political insight.

As far as I can tell, America is going to keep doing this election thing every four years, so the democrats and republicans are going to keep having their turns. It turns out defamatory political tweets and statuses don’t actually make the slightest bit of difference in how our country operates. They are basically the online version of what the people in Washington are doing to each other right now. And we don’t have a government.

But luckily we still have NFL football, iOS 7, Duck Dynasty, Instagram, the MLB playoffs, Spotify and frozen yogurt places. So we’ll get through this America, the same way we get through everything, with lazy, mindless consumerism.