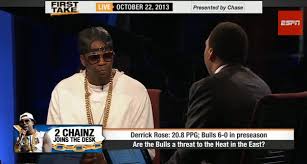 2 Chainz made his second career appearance on ESPN’s First Take with Skip Bayless and Stephen A. Smith. They discussed the NBA. Check it out:

Things you may have noticed:

-Kids, if you want to make it in sports media, learn how to YELL THINGS INTO PEOPLE’s FACES. I write about sports professionally here and there, but I make so much less than the people who YELL THINGS INTO OTHER PEOPLE’S FACES.