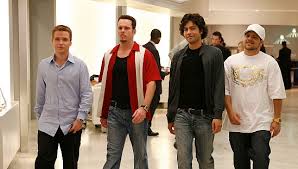 Remember when Entourage went off the air and every guy on the planet had to focus on their not-nearly-as-cool-as-Vince-Chase’s-life-life? Well, I had advice for the cast of Entourage around that time. My advice was that they officially change their names to the names of their characters on the show and try to typecast themselves into popular films. It would help obsessive Entourage fans into thinking the plot is actually real (even though this would actually make no sense. How would casting a fictional Hollywood character into a fictional movie even work? Would they understand they are in a movie or just kind of go with the plot?). The point is that it would be fun. Imagine Turtle in a Fast and Furious movie. Or Johnny Drama in an episode of Modern Family. Or “E” as the best friend in Don Jon.

Unfortunately, I never put this idea into writing. I just talked about it like two times to random people after a few beers. So clearly they never took my advice. They were more interested in “expanding their range” and “trying out new roles.” Well how has that gone for them?

Here’s a quick glance at the recent work of Vinny Chase and the boys:

That’s four question marks next to the Entourage film. Even IMDB is anxious. They are basically saying “umm he was in two movies, he narrated one, he was in the Entourage show and uhhh….they’re doing a movie of that too…right?…Yeah, whatever, let’s just list it.”

Yeah I know, my IMDB impression is pretty dead on.

A big 2014 coming up for Turtle.  He’s set to be in Think Like a Man Too in which he’ll be playing the role of  Jeremy.

To be fair, Connolly does end up dating Drew Barrymore in He’s Just Not That Into You. Connolly and Griener were both allowed their one big box office movies with star actors. It was their “Hey, it’s that guy from Entourage” movies. Grenier’s was The Devil Wears Prada.

Dillon is the exception. Little known fact: Dillion’s role as “Carl Scudder” in Hotel For Dogs was Daniel Day Lewis’ inspiration when he was shooting Lincoln.

Well, that was depressing. Jeremy Piven is the only actor that came out of that series with people actually calling him by his real name, which is ironic considering Ari Gold was easily the most memorable character from the show. Honestly, in order to find those IMDB pages I had to google “Vince, E, Turtle and Drama”

Then I heard that Mark Wahlberg claimed that greediness was the reason for the setbacks in the Entourage movie. It turns out Ferrara and Grenier are not signed on to the film. Seriously? You guys think they were going to cast you in Gravity?

Then I became completely at ease when Grenier Instagrammed a picture of the four actors together with these words over the image:

To all Entourage fans. I owe it to you to make a couple things clear. I take my role as Vince on the show & off very seriously. All decisions I make personally & for business are for the principle of friendship and brotherhood. It has, & never will be about the money for me. I promise. I will always stand up for the boys (that includes you) & do what I can to make sure they are treated fairly, and not be taken advantage of by anybody. The spirit of Entourage is about sharing the opportunities given to us and I will sign any deal that gives ALL the boys an opportunity to share in the upside of success EQUALLY. I assure you, despite the perception, there is no greed in my heart. Remember, it will all work out in the end. It always does. —— I will try to answer questions with hashtag#entourageboysshare

He literally could not have thought of a more Vince thing to say, right down to calling fans of Entourage “the boys.”

So rest easy, people who want to see four guys degrade women and one agent scream homophobic slurs at his asian assistant, Entourage will be back. That being said, if 2 Chainz doesn’t have a cameo, they will have at least one angry fan on their hands.