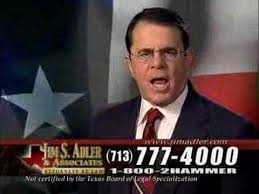 On days like these I often wish there was someone who I could hire to serve justice and solve all of our problems. Someone who could help all the people who get criticized by the media and millions of people on Twitter. It could be as simple as calling or e-mailing him, explaining your problem and then paying him money to solve it for you.

Well, this commercial just came on my television and it’s the greatest thing I’ve ever seen in my life:

I know that the commercial says you’re supposed to hire him if you’ve been in a truck accident, but maybe “hurt by big truck” is just a metaphor for being wronged by the national media. Maybe Jim Adler the “Texas Hammer” is just the guy to solve society’s problems.

So I decided to do an experiment. I decided to take a few of the biggest news stories from the past five days and email Adler pretending to be a key figure from each story and ask for his help. Adler & Associates has it’s own website (it’s awesome by the way, there’s lots of fire and he’s screaming and holding a slede hammer) and it has a section for you to have your case  be reviewed for free to see if Adler will take it on. Perfect.

Here are the issues that I covered (click each headline for link to story):

Marcus Smart Shoves Fan Who Screamed At Him.

Quick Recap: In a recent loss at Texas Tech, Oklahoma State sophomore and future NBA player Marcus Smart fell into the crowd trying to block a shot. He eventually jumped up and went directly towards a grown man named Jeff Orr and angrily shoved him. Smart claimed Orr used a racial slur towards him. Orr says that he called Smart “a piece of crap.”

Email from Jeff Orr (with obnoxious arrows pointing where to look):

Marcus Smart shoved me. I’m a grown man and I screamed “piece of crap” at a 19-year old kid. How much money can you get me?

Eight pre-game beers is too many. I only had seven. Totally sober-ish. Whatever. Get em Hammer.

Sochi, Russia is the host of the 2014 Winter Olympics, but has been harshly criticized for it’s anti-gay laws supported by Russian leader Vladimir Putin. Even after heavy pressure from much of the world Putin has refused to allow basic rights to homosexuals.

Email from Vladimir Putin (without obnoxious arrows, you know where to look now):

The gays are in my country! They ride with boards of snow and twirl on shoes for ice. You come to this country and you stop this! Bring your hammer!

Also do you know how get Flappy Bird back on iPhone?

*Accidentally used my real email on this one. Rookie mistake.

Danish Zoo Kills Healthy Giraffe, Feeds it to Lion in Front of Children

Quick Breakdown: A Danish zoo claimed that there were too many giraffes of similar genes in their international breeding program. So they killed a healthy 18 month-old giraffe in front of children and fed it to a lion.

Quick truck question: Is it big enough to store giraffes if they are lying down? I have 5 or 6 giraffes that are…uhh…sleeping.

I need to transport them to kid’s bday party for killing festival. I mean petting zoo. Yeah, petting zoo.

Soon to be NFL draft pick Michael Sam announced that he is a homosexual. While he received incredible public support, some are still worried about how an NFL locker room will accept him. New Orleans Saint, Jonathan Vilma claimed he would be worried about a gay player staring at him in the shower.

There will be a gay player in the NFL soon. I don’t need any money, but I want you to make sure I get my own shower with four closed off doors.

From here on out I want my showers just like my mind: narrow and closed off.

Alex Rodriguez reluctantly dropped his lawsuit against the MLB and will be serving his massive suspension as a repeat violator of the league’s steroid policy.

If Bud Selig thinks this is over he’s DEAD wrong. Can you hit him with your truck?

P.S. Are your lawyer skills decreasing with your age? I know a guy who can give you stuff to stay sharp if you’re ok with needles.

My Email to Jim Adler

Can you stop yelling at people? We’re trying to create a world where we can talk about issues that help the greater good.

You screaming at people with sledge hammers and giant trucks and fire doesn’t help. It makes people think that’s how we resolve conflict, through complete insanity.

Also, I found Arby’s meat in my Arby’s sandwich. It was gross. How much you think I could get in court, ballpark?

And now we play the waiting game…