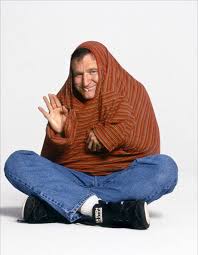 “I don’t believe it. He always seemed so happy.”

Some form of that sentence was said all across America in the days following Robin Williams’ suicide. It seemed unfathomable that a man who could appear so unabashedly cheerful and hilarious on screen could possibly have the desire to kill himself.

Well, Robin Williams was an actor. Appearing to be something other than himself was his chosen profession. He doesn’t actually wear drag and babysit for money, he has never fought Captain Hook, he doesn’t actually have a disorder that forces him to age too quickly, he didn’t invent Flubber and he was definitely not always happy.

Williams appeared happy for millions of other people most likely for the same three reasons most people of his profession do: he was paid to do so, he possessed talent and passion for acting and, hopefully, he could make other people happy in the process. All three of those ring true.

However, there’s another possibility: It was the easiest way to mask severe unhappiness. We don’t know all the details of Williams’ mindset and situation prior to his death nor am I anything resembling an expert on depression or mental illness so forgive me for speaking in generalities going forward. People with depression don’t wear a sign around informing people of their struggle. There might be a few telltale signs, but they are not universal. If there’s anything to be learned from Williams’ death it’s that you never know who might be suffering the most.

Considering there are incredible and inspiring scenes of Williams in films like Dead Poets Society, Good Will Hunting, Hook, Aladin, Patch Adams and even the graduation speech from Jack, you could argue I did a poor job of choosing a Robin Williams’ video clip to show for this story. But I took some time to think about it and I want to show this clip of Williams and a bunch of kids farting into a can.

Scientifically speaking, I’m not sure that collecting farts in a coffee can and lighting a match will really cause an explosion, but I chose this scene from Jack for a couple reasons. It’s typical Robin Williams; being silly and ridiculous, not caring about how his comedy will be received by critics and causing uncontrollable laughter of children, the least cynical of us all.

But more importantly, I chose it because it provides a vague metaphor. Jack and those kids collected those farts until the can couldn’t even be opened without causing one of them to lose consciousness. As they passed it around and farted in it, nothing notably changed about the tin can. The sides didn’t dent. It did not become heavier or look unable to withstand more farts. But when they lit a match and dropped it in the can it caused an explosion louder and more powerful than any one fart. It was like a super-fart and thank God it didn’t kill them all.

So goes depression and other forms of mental illness. Each blow can seem inconsquential to everyone but the victim. It can build up very slowly, but the final straw can turn out to be tragic. In society, we often wait until that match is lit to wonder what we could have done differently.

The Detroit Free Press claims that, “research tells us that psychotherapy, or talk therapy, may be the best option for those suffering from mild to moderate levels of depression….Friends and family members play critical roles in helping depressed men.”

People with depression need someone to talk to. They may need to talk about their problems or they may just need to know there is someone out there happily willing to talk to them about anything. We can’t measure what loneliness does to depression, but no problem has ever been made worse by someone else genuinely offering to listen to it. Feeling alone in this world can suck the joy out of anything that once made you happy. People can seem popular, or have money or look happy, but the only way you can truly know that they don’t feel alone is if you are the one providing that companionship.

Physiological diseases are awful. The need to raise money for them is crucial because hope will always remain that it could lead to a cure. Some day we will find a cure to cancer and even a way to prevent it. I believe that. But depression will exist as long as we do. Unhappiness is real, but like a can full of farts, it’s basically intangible.

I have a theory about depression. It’s a theory of degrees. I don’t mean to contradict any medical or psychological facts that are proven, it’s just a theory. I think that we all suffer from some form of depression. Things make us unhappy and certain things make us flat out miserable. It’s when those different degrees of things happen at the wrong time and come together in the wrong way that we can cross a line and become clinically depressed. It’s not a matter of weakness. It’s a matter of chance and accumulation. It’s a matter of filling up that can. It could happen to any of us. It’s in our best interest to be there for one another. A few conversations can make all the difference. If someone is too deep in that hole than it becomes your responsibility to convince them to seek help. We don’t know what degrees of unhappiness got them there, unless you’re a professional, it’s not our place to say what degrees of help will get them out. But that’s why we try. The smallest degree at the right time might help in the biggest way.

We don’t know what exactly Robin Williams was going through and I don’t mean to imply that one person could have saved him. What he taught us, though, is not to assume. Don’t assume happiness and don’t assume strength. We can provide each other that strength and that can lead to happiness. There’s probably someone in your life whom you can’t name a person they are really close to. Don’t assume they have people you don’t know about to talk to. Be one of those people and you won’t have to assume. It might seem like nothing, but if you poke the smallest hole in that tin can, you never know, a bunch of farts might escape through. Anything to avoid that explosion.